History of the Competition

In 1988, the Panel on Engineering Design initiated a national “design and build” competition, known today as The Warman Student Design and Build Competition.

The competition is open to students in mechanical engineering who are undertaking their first design analysis course. The competition receives entries from all across the Asia Pacific region, with the majority coming from Australia and NZ. Heats are held at each participating University as part of design engineering courses, typically in the second year of study.

The winning team from the heats at each university then converge on the National Final in Sydney to determine exactly who the region’s best budding engineering designers are.

In 1989 Engineers Australia, through the National Committee on Engineering Design (NCED), commissioned the design and manufacture of a bronze casting to be known as the Warman Trophy. It was intended to award the mechanically themed trophy to the University of the winning team, for them to display prominently for one year, as a way of strengthening links with the competition.

In later years it was decided to award the trophy to the winning team themselves, although still with the idea that the trophy would be displayed prominently within their university. 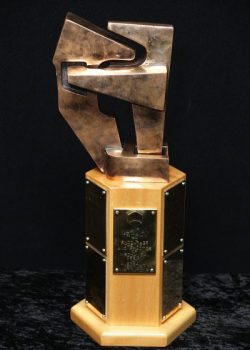 The Warman Student Design and Build Competition had its genesis in mid-1987 when John Reizes, at that time a member of Engineers Australia’s Mechanical College Board, suggested setting up an Australia-wide, creative, practical student design competition.  John’s concept was to broaden the scope of a second-year student design-and-build project Alex Churches had been running in the School of Mechanical and Manufacturing Engineering at the University of NSW in Kensington.

The basic concept was to offer an outstanding, ready-made, annual, creative, hands-on design-and-build project at second-year level to all Australian universities running a broadly “mechanical” course.  The aim was to increase students’ experience in creative thinking, practical engineering design and hands-on construction.  The Mechanical College Board agreed to the competition being set up provided a long-term sponsor could be found.  It was Martin Thomas, at that time Chair of the Mechanical College Board who, after the first project had been completed with enthusiasm all round, “tapped Charles Warman on the shoulder”.  On Charles’ enthusiastic agreement, the competition was founded and named the “Warman Student Design-and-Build Competition”.  It was also at John’s suggestion that the College Board established the National Panel on Engineering Design as a home for the new design-and-build competition.  The National Panel was later upgraded to the National Committee on Engineering Design (NCED) and has, from the very beginning, been responsible for organising and running “the Warman”.

In addition to running the Warman Student Design and Build Competition other priority objectives of NCED have been promoting and enhancing mechanical engineering design and championing politically and professionally the case for the creation of a ‘Cooperative Centre for Mechanical Engineering Design’. The Centre remains a work in progress.